It's always darkest before the dawn... Thames Path 100 ramble

‘And all of the ghouls come out to play/ And every demon wants his pound of flesh/ But I like to keep some things to myself/ I like to keep my issues drawn/ It's always darkest before the dawn...’ (Florence and the Machine song, ‘Shake it Out’, which seemed to be stuck in my head for a lot of the hard night section...)

Actually, I can remember the song I had stuck in my head last year...at around the 70mile mark, in a cold, wet field; it was Paradise by Coldplay (ha)!  Somehow, ironic or not, my stuck-in-my-head song choices seem to fit!

“Whatever level of discomfort you reach, you reach deliberately. You’ve met the negative head-on, on your own terms. You own it, and you’ll own it forever.
And your world gets bigger. Your spectrum of experiences broadens in all directions — positive and negative. We don’t grow in a line. We grow in a sphere. If you master X, you get access to Y. That’s how it works”. – Johnny B. Truant (Taken from ‘You are dying, and your world is a lie’, this awesome writer dude who just writes really awesome blogs/ books/ has a website...check him out!)

So, wow, what a weekend the Thames Path 100 was!  Below is what I wrote at the time and then I’ve added some other stuff to the random ramblings.... 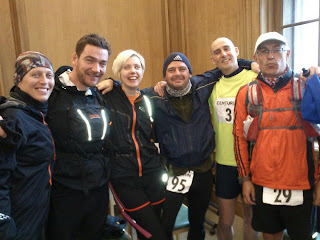 
So, although I had trained a little, I haven’t run in two weeks whilst I’ve been in London. It’s all been pretty hectic. Good, but hectic. And then before I knew it, Thames Path race day was looming. I had massive unfinished business with this, and I was determined to do it.


A few days or so before Thames Path, I was doing some reading up of Thames Path/ Centurion related stuff on the website and also got a few pre-race emails, and then as the week progressed, it became apparent that weather would again interfere with my mission to run to oxford. When it was confirmed that the course would indeed be drastically altered due to flooding along the Thames Path, I felt pretty stressed out. Although, obviously, everyone must have...especially the poor organisers. So, the changes went like this: “The first 38 miles of the course are unchanged. At Cookham you will turn around and run back to Walton (aid station 1). At Walton you will turn around and head back to Cookham. At Cookham the second time you will turn around and run back only as far as Windsor where you will finish. Examine the aid station link carefully for the precise details. The course distance is as close to 100 miles as we can make it, but will run very slightly long, potentially 2 - 3 miles”.


Now, I love point-to-point courses because you’re running to somewhere/ progressing towards a destination, and I pretty much really don’t like laps and out-and-backs very much; I don’t even like them in marathons. Therefore, I was really dreading the fact that a 100mile course would now be made up of all these out-and-back sections. Also, I was a little worried that the path was going to end up pretty muddy/ trampled from all the running up and down. This did happen, but I think it was inevitable, and it had been wet leading up to the event. It’s quite funny, because in the first bit I kept thinking ‘oh, I don’t really like this concrete bit around the streets’, but afterwards, I think all that was on my mind and everyone else’s was, ‘please let this mud stop, bring back the concrete’. 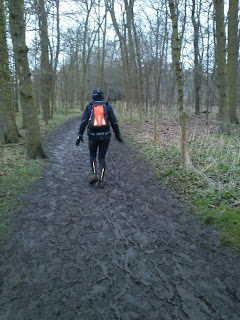 This isn’t going to be a very clear race report, as such. I’ve got lots of work to do (and some sleeping) and most of the thoughts that keep coming to mind revolve around being chilly, mud & the race being quite brutal. Running wise, I like to think of myself as quite a tough cookie. However, it’s strange...you wouldn’t normally think of the flat Thames Path + running, and think ‘brutal’. Okay, so it was close to 103 miles, but still. Mentally it was very tough. I coped well with seeing front runners on their way back to the next CP near the start of the race. However, as tiredness set in and it got a bit chilly, you couldn’t help but ‘torture’ yourself with thoughts on how much further ahead they were than you. It wasn’t that you wanted to beat them, you just wanted the mud to be over as soon as possible and to be warm and to sleep. 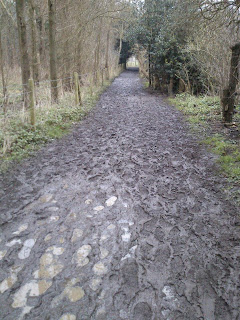 Some runners reckoned it wasn’t as cold as it had been forecast. However, I felt freezing...I really couldn’t warm up & I kept layering up. During the night section, I felt so sleepy. I kept drinking Lucozade to pep myself up and listened to some music and my mp3 and sang a bit to myself...anything to keep myself awake. Oh, and I rambled onto Traviss a lot! Thank goodness I ended up running with him, it was so lovely to have company and someone to talk to/ steal American m&ms off of & generally keep myself sane for 80 miles. 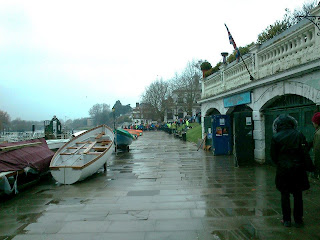 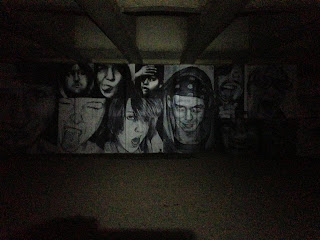 At 3am on Sunday morning and around mile 65 or so, I felt a sharp pain, like I’d been cut, on the sole of my foot. I don’t get blisters a lot, but after peeling off my sock, I realised that I had a lot. The one that was causing me particular discomfort was between my big toe & second toe, right at the bottom. My feet were so macerated and blistered and sore. I just had to pierce the blisters and plaster up and hope for the best. I was a bit worried. Fortunately, they didn’t get any worse for some time. However, the pain and discomfort from my feet in the last 15 miles was awful. Really unbearable.


I kept ‘treating’ myself to little sit-downs on benches or leaning against a post, to take off my shoe and air my feet & itch them...they were so hot and itchy and sore. So, there I was, freezing, but my feet were steaming hot. Not that I was in any great physical state by this point, but I found that I was still running sort of okay, because walking was harder than run-shuffling, since it was putting more pressure on my feet/ longer contact with the ground....so I was able to do little sprints, walk, run, hobble etc. They really, really did hurt though. But I accept the pain. I know doing a 100 miler is going to involve some discomfort. I did have a bit of a cry in the last 20 miles though. I just felt very emotional. I was emotional about my sore feet and emotional about the prospect of finishing this one after last year. This weekend was just surreal.


There’s so much more I need to write really. And to mention that the volunteers/ aid station folk were all fantastic. I was moving about and freezing, so they must have been so cold stood there at the CPs, but had to keep going, to keep us all fed and chirpy.

Getting to that finish line was amazing, but so strange. I made it in around 28 hrs. 40ish something mins. It never quite seems real that you travelled that far without transport. Today I have hobbled a lot & my feet are quite swollen, but it’s all worth it :-) 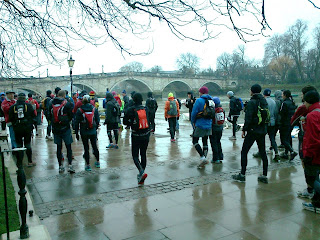 I think I got my eating pretty spot-on for this. But it’s so easy to make mistakes and not eat enough/ the right stuff. I think it’s a pretty common thing that you get into a pace whilst running an ultra and just don’t feel like eating so much...I do this quite a lot. I can remember moments where I’ve had to literally ‘shoot’ food back before with water, which makes you want to be sick, but you have to do it anyway to just get something, anything into your stomach. This tends to happen to me if I leave it too long to eat, because then I really find it hard to chew and eat and swallow food and it’s a vicious circle that you have to break. If you don’t eat enough, often enough then you feel sick and don’t feel like eating. But if you feel sick and don’t feel like eating, then you can’t get in the fuel that you need. And if you can’t get in the fuel that you need, then you’re basically screwed!  So, I started nibbling on some munchies from the first five miles or so.

Food I munched (in no specific order)....

I loved it. Even though I had a cry and my feet were trashed and itchy and hot and sore. I loved it even though I couldn’t seem to get warm and those last few miles seemed to go on and on forever, with the added nuisance of this amazingly freezing persistent mean wind that we all kept swearing at. I’ve really missed the adventure and I’m seriously craving some more. My overall time was 28h48m3s. Oh, and my trail shoes are still muddy & in a plastic bag. It’s just how I roll... 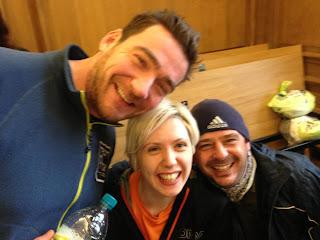 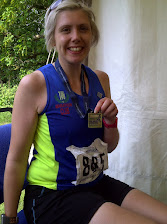 Some of my Bloggage...

A little bit about me...